My father passed on December 21, 2005 under very strange circumstances. Elder abuse is all too common when there is a large amount of money or land in an estate. Abuse of an elder including demands for a parent to sign Real Estate Deeds or be faced with threats of abandonment by an adult daughter and granddaughter who is married to a lawyer to make it all legal is a dastardly and cowardly conduct. The judicial system seems ill equipped and not very interested in addressing the problem especially if one of its own is engaged in self enrichment.

I am offering a $10,000 Reward for Information leading to the arrest and conviction of the party and/or parties responsible for the wrongful death of Ivan J. Fail on December 21, 2005 at the Prairie Mission Retirement Center in St Paul Kansas. Contact Larry Fail at 800-722-9529.
Email macphale@gmail.com 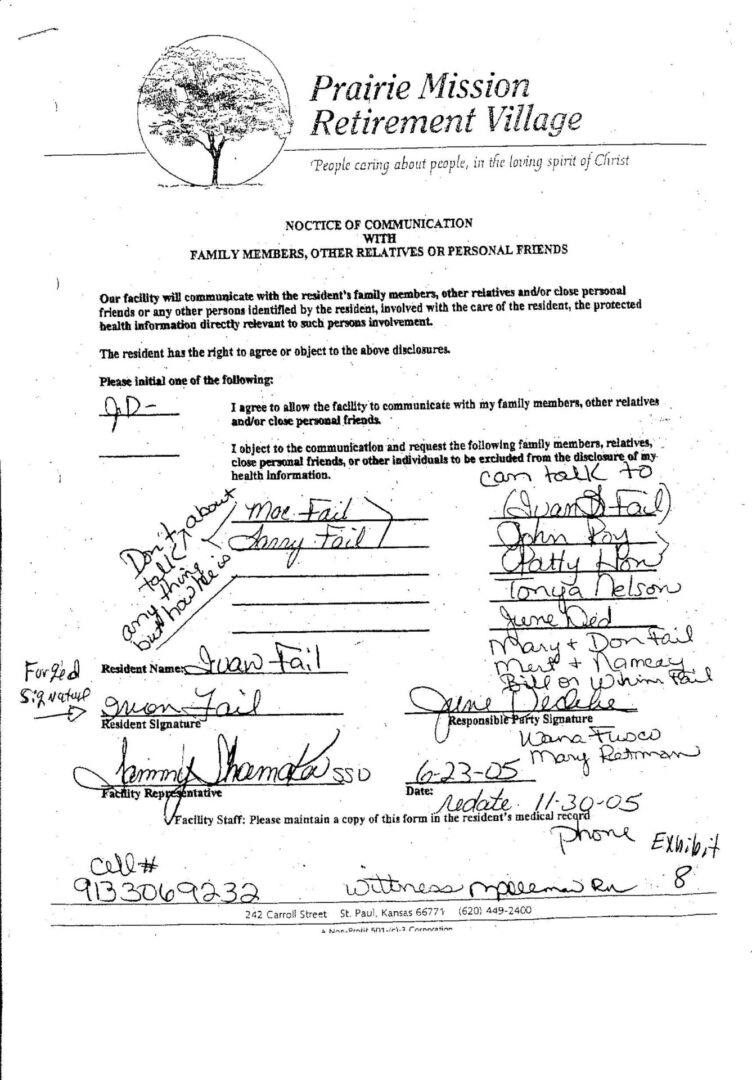 This is the "No Contact Order" that my sister June issued against me in late November 2005 after Ivan Lee Fail told her that I had I discovered the deed with the names of Lawyer Gary A. Nelson and his wife Tonia Dedeke Nelson on it to $500,000 worth of land that I was supposed to receive per terms of a constructive trust, and the wishes of both my father and mother who passed in 2000. June knew that dad would correct the deed if I talked to him. June had attempted to steal my brother John Roy Fail's land by getting my dad to sign a deed with the Nelsons names on it. I was present in my father's Hospital room in May 2005 when he signed the deed. I objected and told him that this is not what he and mom had agreed on before her death. Dad agreed with me and told June the deal was off and to leave the deed in John's name. He would have done the same with my land, and corrected the deed in my name, and June knew it. That is why she issued the "No Contact Order". The she was in a panic that I would show up anyway and my father died shortly thereafter. Did she kill him? All the elements were present. Motive, Greed, Opportunity and knowledge, not to mention sour grapes, pay back and vengeance.

June Dedeke & Tonia Dedeke Nelson - Foul Play or Murder?
It is the opinion of the author Iva June Dedeke and her daughter Tonia Dedeke Nelson engaged in foul play that lead to the death of Ivan J. Fail on December 21, 2011 in the Prairie Mission Retirement Village in St Paul Kansas. Both are nurses and had full access and authority over Mr. Fail's medications. The motive was an estimated $950,000 in land, cash CD's and other assets in Wilson County Kansas. A large reward is being offered for information that will lead to the arrest and conviction of the party or parties responsible and/or involved. June Dedeke used her Medical Power of Attorney to issue a no contact order against her brother Larry Fail who she defrauded thereby preventing him from seeing his father until he died. He died before Larry could get to him and correct the deed. June had him buried within 48 hours preventing an autopsy. June did this after she was informed by her older brother Ivan Lee Fail that Larry Fail had discovered the "Transfer On death Deed" that she had master minded and recorded that wrongfully took land intended for Larry Fail. The fraudulent deed transferred the land to her daughter Tonia Dedeke Nelson and her lawyer husband Gary A. Nelson who is a practicing lawyer in Leavenworth Kansas. June had attempted to steal her younger brother John Roy Fail's land a few months earlier by having her father Ivan J. Fail sign another TOD deed until Larry objected and their father told June the deal was off. Was it simply a case of extreme greed, foul play or murder?

I personally witnessed Cruel Elder abuse of my father Ivan J. Fail by his daughter, my sister Iva June Fail Dedeke and her husband Gene Dedeke during my visit in October and November 2005. It was so extreme that I called several people in to help me deal with the problem. I called my father’s brother, my uncle Bill Fail and his wife Winifred and my brother Ivan Lee Fail. I spent several hours explaining what I had witnessed. June Gene continuously threatened my father with abandonment including repeated statements that they were going to leave “today” if he did not do as they instructed him to do. These threats included telling my father to tell Frank Greve that he could not come to the house anymore. Frank was a lifelong friend of my father and helped him feed his cattle every morning without pay. The threats were so loud, threatening and cruel that my father started crying and agreed to do as June and Gene wanted. They also threatened to leave him if he did not sign a statement that gave June and Gene full control over all of his financial matters including who could come to the house including family. One morning I heard my sister June pounding on the dining room table demanding that my dad sign the paper. I ran in and took the paper off the table and read it. June was pounding me on the chest and demanding the letter back. I put it in my pocket and planned on keeping it. Dad started crying. I took it out of my pocket and I let June tear it out of hands. I told dad not to sign it. There were many other similar events during my stay that were deplorable and unset my father immensely. No one was able to help me including Gayle and her husband, the neighbor lady who ran a rest home nearby that my dad had stayed with off and on. A full and detailed report is available on this web site and will also be in the book and the film.