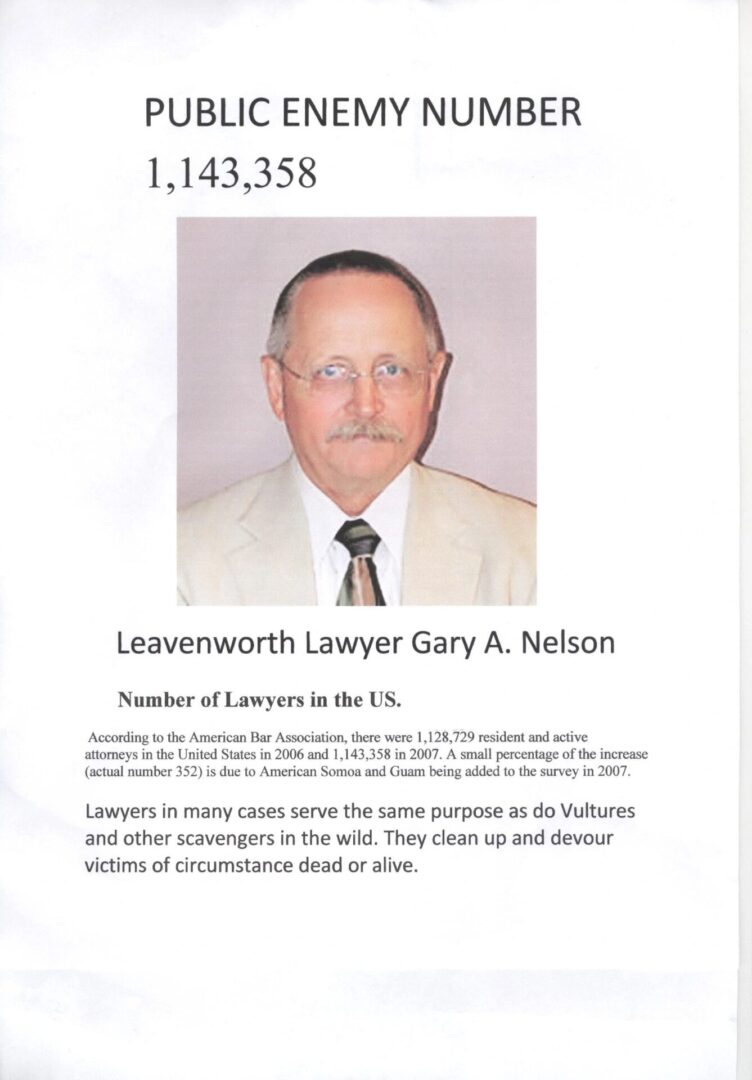 There are many Lawyers. There are far fewer decent, honest, competent Lawyers that represent their Clients as Attorneys that work hard to balance their efforts between representing their client’s best interest and representing their own. Those few that refuse to cross that narrow line of temptation to enrich themselves at the expense of their clients and/or innocent people have my greatest admiration and respect.

Then there are Public Enemy lawyers like Gary A. Nelson who suffers from the Napoleon Short Man Complex. Winning is the only thing that matters to them regardless of the cost to innocent lives, fair play and justice. In addition to greed and self enrichment - They wage war against the innocent to appease their perceived handicap of shortness.

From Wikipedia, the free encyclopedia

Napoleon complex is an informal term describing an alleged type of inferiority complex which is said to affect some people, especially men, who are short in stature. The term is also used more generally to describe people who are driven by a perceived handicap to overcompensate in other aspects of their lives. Other names for the term include Napoleon syndrome[1] and Short Man syndrome.[2] It does not appear in the American Psychiatric Association's Diagnostic and Statistical Manual of Mental Disorders (DSM).[3]

The Napoleon complex is named after French Emperor Napoleon Bonaparte. The conventional wisdom is that Napoleon compensated for his short height by seeking power, war and conquest.

In the Fail v Fail case Lawyer Gary A. Nelson through collusion and conversion in a conspiratorial arrangement to defraud another had his name placed on the deed to hundreds of thousands of dollars worth of prime Wilson County Kansas Farm land intended for his victim by the victims trusting parents. The victim of his scheme sued lawyer Nelson and others and spent many thousands of dollars in lawyer’s fees but was unable to find a lawyer with the same degree of interest and tenacity as that of lawyer Gary A. Nelson who had his name on the deed.

Lawyer Nelson also engaged in a deceitful campaign to discredit his victim and demoralize his lawyers causing the victims lawyers to abandon him. Lawyer Nelson also was a lifelong personal friend of Judge David Rogers who tossed the Victims case out of Court. Judge Rogers' father, the late Steven Rogers was the victim's ex-wife's divorce lawyer in 1963 in the same Court Room. Lawyer Nelson's victim filed a complaint against Lawyer Nelson with the Kansas Supreme Court Disciplinary Administrator Stan Hazlett. The complaint was dismissed without even imposing on Lawyer Nelson for a response. Stan Hazlett has been a personal friend of Lawyer Nelson for many years. Birds of a feather roost together. Corrupt and dishonest lawyers hang together like a bunch of grapes. In the Old West they would have been hung together. Justice was swift and mistakes were made, but injustice was scorned. Today it is accepted as the status quo.

*Authors opinion based on first hand personal experience and the facts.